Our large-scale pilot study has started!

The past few months have been very busy as we prepare for our large-scale pilot study across Europe. Researchers and practitioners have worked together to plan for how the Amigo Reader and Navigo game will be used in the classroom. Our consortium have been busy setting up tablets with the iRead apps in school, training staff and supporting the introduction of the technologies in the classroom.

Below you can read about the various activities and events different project partners have been involved in as well as exciting news about our quality mark award from the Department for Education, in England!

The iRead project team are extremely proud to announce that the Navigo game has been awarded a quality mark by the Department for Education in England. The Navigo game now features in the initial list of apps to be given the prestigious standard by an independent expert education panel. The standard is awarded to apps that are assessed by an expert panel and judged to have good educational value. The DfE have launched the quality mark as part of the Hungry Little Minds Campaign that aims to provide guidance for parents on choosing and using apps that can benefit children’s literacy and language. The DfE’s three-year campaign encourages parents and carers to engage in activities that support their child’s early learning and help set them up for school and beyond.

Over the course of the Autumn term, researchers from the UK, Germany, Spain, Sweden, Greece and Romania have carried out a series of continuing professional development (CPD) sessions across schools. These sessions have aimed to introduce staff to the Amigo and Navigo apps and teacher tool. The focus has been on sharing information about the theoretical underpinnings as well as practically learning how to use these technologies. 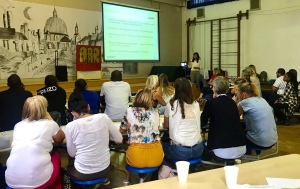 As part of the CPD process, a number of special resources were created to support teaching staff in using the technologies. These have included culturally specific teacher manuals, lesson plans and lists that map the two apps to different learning stages. These resources are intended to support school staff in using the teacher tool alongside the Amigo Reader and Navigo game.

The CPD sessions have been extremely useful in identifying some of priorities and questions that teachers have identified. Based on these sessions, the teacher manuals continue to evolve and we are constantly adding to the ‘frequently asked questions’ section of the teacher manual. The latest versions of the manual in different languages can be found on our website in the ‘resources for schools’ section here.

Universities and research institutions across Europe opened their doors to the public in September in a Europe-wide public event designed to bring researchers closer to the open public. Project partners in Greece, Romania and the UK took this opportunity to share progress on the iRead project and showcase the technologies to children and families attending the open events.

In Greece, the NTUA and Doukas teams offered children opportunities to play the Navigo game whilst parents learned about the adaptive and personalised features of the Navigo and Amigo apps. In Romania, the ULBS team demonstrated the two apps to pupils from across the area, explaining how these might be used in schools settings. In the UK, the UCL team participated in the ‘It’s All Academic” festival, showcasing the iRead technologies in a one day free interactive festival for public engagement.

We are inviting primary school children in the UK and in Greece in Years 1-3 to participate in using the Navigo game throughout the period of 2019-2020.
Are you a parent or carer who is interested in supporting children’s reading development through technologies? Do you have access to an Android tablet at home? Sign up here to be part of our online pilot and use the Navigo game. In order to use the Navigo game you need to create an account for your child.

Sending good wishes from all the iRead project team for the festive period and new year. We look forward to bringing you more updates over the course of next term!

Last but not least we would like to acknowledge the important contribution that teachers and pupils from the following schools have made to the iRead project over the last term: