By Leona Bunting, University of Gothenburg

Leona from the University of Gothenburg team presented information about the iRead Project at two separate dialogue seminars held at the Framtidens lärande event. 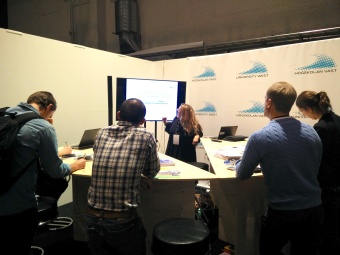 Framtidens lärande (Future Learning), is a national meeting ground for practitioners, researchers and trade, established ten years ago. This year, the organizers tried a more regional approach and thus the conference focusing on the digitalization in schools, was held in Trollhättan, West Sweden, 14-15 November. https://www2.diu.se/framlar/konferensen/

iRead was invited to hold dialogue seminars which consisted of short presentations followed by a discussion, for a group of people who had signed up in advance. https://www2.diu.se/framlar/konferensen/medverkande-dialogseminarier-framtidens-larande-vast/.

A group of interested teachers and IT pedagogues came to the seminars. First they got to hear about the project; understand about the progress so far, and hear about the current focus on the evaluation phase. Participants then tried both the Amigo Reader and the Navigo games on tablets provided by the UGOT team. Attendees reported that they all really liked the idea of the adaptivity and that the apps align with the curriculum. The apps certainly generated lots of interest and one teacher in particular was very keen to involve their class in the evaluation. All participant received the team’s contact details which has already resulted in follow up contact from a teacher who is keen for their students to be involved in the project!