Ask the teachers: Vivlos Primary School – Applying iRead to Naxos, the largest of the Cycladic islands!

This is the fourth in series of blogs with schools participating in the research phase of the iRead project across Europe. Elpiniki Margariti asked Skarkos Christos from Vivlos primary school about their experiences with the iRead technologies so far.

“Naxos is an island of about 20,000 inhabitants. It is the eastern-most point of Europe that is participating in the iRead large scale pilot study! The residents are interspersed throughout many villages. Vivlos primary school is located in the village of Vivlos, just 8 km from the main town of Naxos.

The school does not have a steady student population. It has fluctuated over the years. In the last two school years, there have been students from all six grades of primary school. In the 2019-20 academic year, there were 70 students, of whom 15 had moved to Greece from other countries. 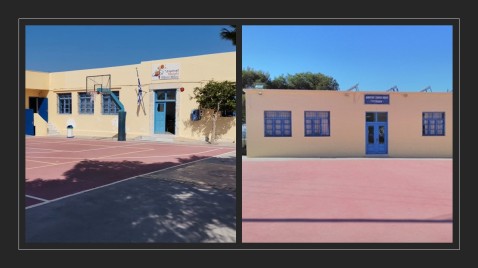 Vivlos primary school has a lot of experience in implementing school innovation activities. For example, since 2003, there has been a Flexible Zone program running which implements a number of initiatives relating to: Environmental Education, Literacy, Cultural issues, Robotics and more.

Since 2019, we have participated in the iRead project and have utilized the iRead technologies in all sections of the school. Our classes have 10-11 students, therefore with the 10 tablets that are available to us, we are able to deliver teaching interventions with one tablet per student. 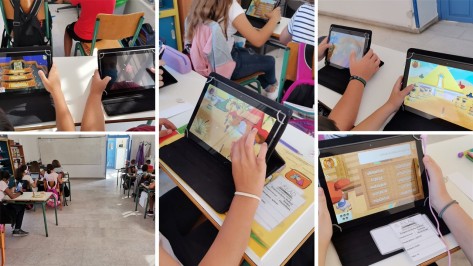 Last year, to support our regular use of the tablets, we had given each tablet a number and each tablet had been assigned to a student meaning that everyone always used the same device. To manage how the tablets were being used across classes, we had a dedicated teaching hour every week for each class group to use the tablets.

So that students did not disturb each other during the sessions, each student brought with him his own headphones (those who didn’t have them borrowed one from the computer lab). This also supported students in being able to clearly listen to the verbal instructions within the Navigo game.

From the start of the project, at least in the fifth grade, we used the teacher tool to adapt the content of the activities so that they were appropriate for the class group. We have been taking the following into account:

Thus, for students who have recently moved here and have not sufficiently mastered the Greek language, we still assigned individualized tasks with emphasis on the grapho-phonological elements of the language.

Earlier this year, whilst our school was closed due to COVID-19, we found that we needed to pause in using the iRead technologies as the apps were locally saved on specific devices. However, since the beginning of the new academic year 2020-21, we have restarted again.

Reflecting back on the brief utilization of the iRead applications so far, we have seen that the students have been very satisfied with the environment, the level and the type of activities on offer. The only point that created dissatisfaction, was the pronunciation of certain words in Greek within the application. Students have expressed that they enjoy receiving and collecting rewards for completing modules. Overall, students have been happily anticipating their weekly time with the iRead apps.”

The Doukas team would like to thank Skarkos Christos, Sideris Thanasis, Vavaitis Vasilis and Stamatopoulou Roula and all of the pupils at Vivlos Primary School for being involved with the iRead project. We look forward to working with you all this term!